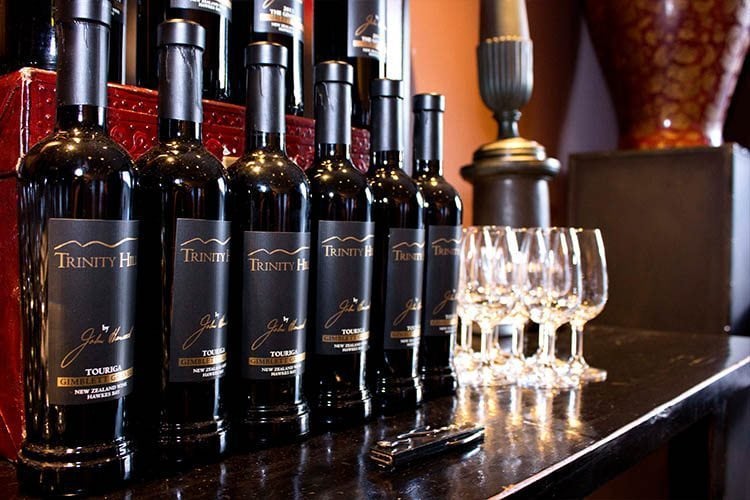 If you are not familiar with Trinity Hill, their story dates back to 1987 when John Hancock met Robert and Robyn Wilson in their London restaurant Bleeding Heart. Over a bottle of John’s award-winning Chardonnay, the concept of a Hawkes Bay winery was born. They were convinced they could produce world-class red wines as well as white in this region of New Zealand. Today Trinity Hill produce a diverse range of award winning wines including Arneis, Chardonnay, Viognier, Syrah, Sauvignon Blanc, Pinot Gris, Rose & Pinot Noir in their three ranges: Homage, Gimblett Gravels & Hawkes Bay ranges.

Winemaker Warren Gibson began his winemaking career in New Zealand in 1986 with John at Morton Estate, subsequently travelling the world as a Flying Winemaker, including vintages in Australia, Italy, Hungary, France and California. It was there that a Chardonnay he made was awarded white wine of the year at the 1997 International Wine Challenge.

This very special evening will feature a five-course degustation menu designed and prepared by Eichardt’s Executive Chef, Will Eaglesfield. Each of the five courses has been expertly matched with one of Trinity Hills fabulous wines.

Tickets are priced at $100 per person which includes all food (five courses) and wines (six in total) for the evening. Seats are strictly limited and will again sell out. As a priority invitation, to secure your seats simply reply to this email and I will make your reservation for the evening.

Please let me know if you have any questions or if I can do anything to assist.