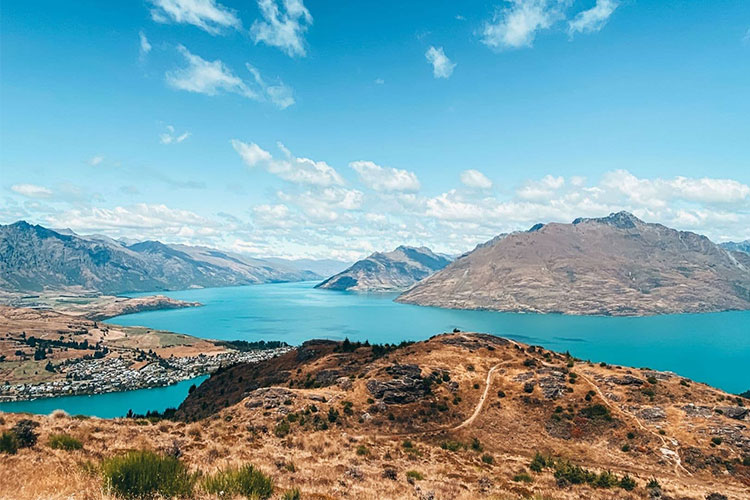 Eichardt’s Private Hotel boasts rich history and incredible views of Lake Wakatipu. In honour of our land and New Zealand’s Māori culture, our lovely Front Office Assistant Manager, Laura Jackson, has shared a piece on a local Māori legend; the creation of Lake Wakatipu. We hope you enjoy the read!

Before the arrival of the first Europeans in New Zealand, no written language existed in
Te Reo Māori, the indigenous Polynesian people of New Zealand, society. All information and
knowledge could only survive if passed on successfully from one generation to the next.
The Māori use mythology to explain the mysteries of life and death, the natural world
and their rich history. The legends and wisdoms told by the Māori form an oral history of
their people, these words have been passed down through generations. Through this,
they cultivated their own mythology to record their past and tell the stories and legends
of gods, heroes and tribal leaders. Most New Zealanders have fond childhood memories of sitting
with their elders or at school, listening to stories of the bonds between the human, natural and
spiritual world. These are shared today as often as they were in the past.

Māori legends and myths are often connected to certain places, like mountains or lakes with significant importance to the local iwi (tribe). In Queenstown, where Eichardt’s Private Hotel boasts incredible views of the lake, there is a story to explain the creation of Lake Wakatipu. According to legend, the lake was created as a result of a young man rescuing his lover.

Before we tell the story of the Māori legend of how Lake Wakatipu came to be, it is
important to note that there are multiple different iwi, who’s versions of the
story we depict here will diverge from and even contradict each other. We have tried
to find the elements which are common to the majority of accounts, but please be
aware certain details may be familiar to some iwi, yet unknown to others.

In the hinterland of Otago, a beautiful woman named Manata was eagerly sought after
by young men, but was jealously guarded by her father, the chief, who had set high
standards for the future husband of his daughter. Among these suitors was a young
man named Matakauri, he loved Manata and she was equally infatuated with him, but
her father kept them apart as Matakauri was a commoner. One night Manata was
stolen by the karara (giant) Matau and he carried her away to his home in the mountains.
Manata’s father promised Matakuri that if he succeeded in rescuing his daughter, he
would not stand in the way of their marriage.

Fortunately, Matakauri had heard that when hot, northwest winds blew, it meant Matau
was sleeping. When the wind blew in that direction, Matakauri set out in search of the
giant. As he drew near, he heard Manata weeping and hurried to where she was
imprisoned. Matakauri found Manata tied to the sleeping giant, with a magical cord
made from the skin of his two-headed dogs, that could not be broken. Matakauri tried
to saw the cord with his knife, but it made no impression. Manata begged Matakauri to
go, fearing that the giant would wake up and kill him. When Matakauri refused to leave
her, Manata started to cry, and as her tears dropped onto the cord, it dissolved and
suddenly she was free.

When they arrived home, Manata’s father was true to his promise and the young
couple married but Matakauri could not forget the threat that hung over their lives. He
knew his wife, or any other women of the tribe, would not be safe while the giant was
alive. Matakauri waited until the northwest wind blew again and set off in search of the
giant. He found the giant sleeping soundly on a bed of bracken, so creeping quietly
around him, Matakauri set fire to the dried bracken. The smoke drifted across the
giant’s body and the flames roared at his sides, causing him to draw up his legs. Before
he could regain consciousness, the giant was suffocated by the smoke. His body sank
deeper and deeper into the earth, until it made a vast gully, many miles in length and a
thousand feet deep. His whole body was consumed and reduced to ashes, except the
heart, which continued to beat strongly in its narrow tomb. The wind stopped and the
rain began to fall, pouring into the newly made gully. The heat from the fire had also
melted the snow on the mountains, and this fell into the gully too. Soon it was filled to
the brim and has since remained as a lake, which when viewed from above, retains the
shape of a giant who had drawn up his knees as he lay stretched along the ground. It is
believed that the daily rising and falling of the lake is attributed to the giant’s still
beating heart.

Insider Tip: Māori culture can be found all around current day Queenstown. If you walk along the shores of Lake Wakatipu near Queenstown Gardens (a few meters from our property) you’ll see a bronze statue of Manata laying down. If you head southwest 8kl towards Glenorchy you’ll find Luxury Lodge, Matakauri Lodge, named after the young warrior.