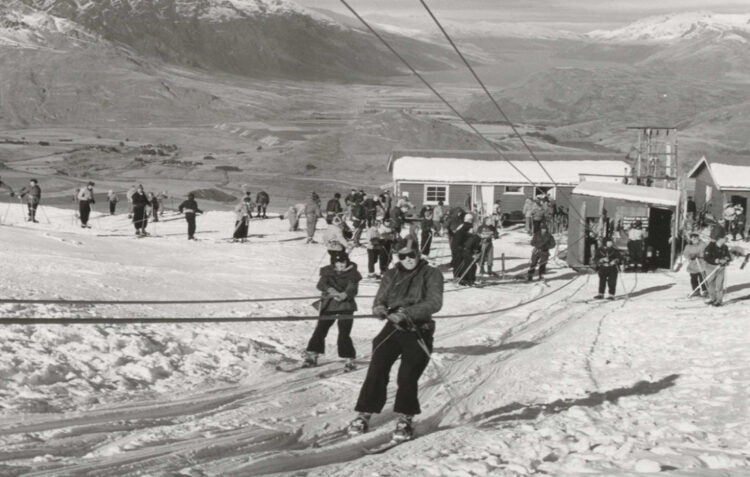 The 17 August 2022 marked the start of a week-long celebration for Coronet Peak, commemorating its 75th year as a commercial ski field. Coronet Peak has played a key part in the evolution of Queenstown and has helped secure this town a spot on the map as a much-loved destination for snow enthusiasts around the world. Memories have been made at Coronet Peak, and generations of families have been brought together by their shared love of the mountains.

To celebrate, we wish to revisit this history and consider how, like Eichardt’s, Coronet Peak became a key part of Queenstown’s story.

Skiing was introduced to New Zealand in the 1860’s by the Norwegian goldminers, who used it as a method of transport to reach their digging sites in winter, however it did not become a popular sporting pastime until the 1900’s when small, locally run ski fields began popping up across the country.

It was Rudolph Wigley and his son Henry who we consider the pioneers of tourism is Central Otago. Henry was a commercial pilot and a keen skier, with a love for the outdoors. Having spent countless hours flying guests from Mount Cook to explore the Southern Alps, he spotted the perfect location for a ski field amongst the mountains below him – Coronet Peak.

In 1947 Bill Hamilton, developed the first rope tow, taking visitors from what is now ‘Car Park 7’ to the slopes of Coronet Peak, which was quickly joined by a café ‘The Pie Palace’. And from there, New Zealand’s first ski field was born.

By 1949 Coronet Peak had its own ski club, the Whakatipu Ski Club, which has since produced many of the New Zealand ski team members and coaches. The club became the birthplace of the internationally recognised ‘One Ski in the Grave’ club, after one club member made a joke about three older members resting in the sun.  The club is open to anyone over the age of 55, and allows the oldest member to ski the first run of the day.

After the success of the first rope tow, Henry Wigley then established two more, and by 1964 the first double chairlift had been developed.  The small base building was extended, and in 1991 the first snow making machine was installed to ensure a bumper ski season year on year.

Coronet Peak has been home to the nation’s top events since it held the first national ski championship in 1948. In 1977, they hosted the national freestyle championships, as documented in a short film ‘Flare’ by local actor and director Sam Neill, and in the 1980s it then secured its spot as the training headquarters for Olympic athletes.

Today, Coronet Peak is home to the most extensive snow making facilities in the Southern Hemisphere, with over 220 snow guns and 40km of roller coaster terrain. Known as the ‘home of good times’, it was the first ski field in NZ to offer night skiing, and has been home to many lively events during Queenstown’s ‘WinterFest’. These events encourage light-hearted fun for all ages and skill levels, and bring locals and visitors together to enjoy the best of the snow season.

Now regularly hosting over 4,000 visitors a day it is clear that snowsports at Coronet Peak have impacted not only Queenstown’s tourism landscape, but New Zealand’s too.

Join the team at NZ Ski in their celebrations over the coming days, and make sure to book your winter trip while you can. With two months of this awesome season still ahead of us, there is certainly a lot to celebrate!