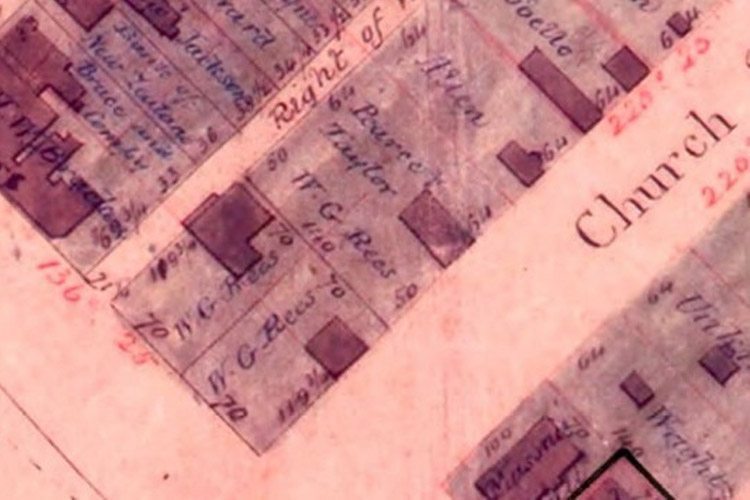 The following is an article from Jackie Gillies & Associates:
Source: http://www.jackiegillies.co.nz/

Archaeologists from Jackie Gillies+Associates have just completed a three week excavation at the Eichardt’s Hotel stable site at the corner of Marine Parade and Church Street on behalf of Skyline Investments Ltd. In 2013 JGA carried out an Archaeological Assessment of the site in advance of an Authority application to develop the land for a new three-storey building. The excavation, led by JGA senior archaeologist Andrea Farminer, uncovered evidence of some of the known and hidden past of the 19th century site including surviving sections of the 1870s cobbled stable floor along with faint traces of the stalls that once housed the hotel’s and guests’ horses.

Other evidence of 19th century activity included remnants of a large rubbish trench that most likely belonged to the hotel next door and which contained large quantities of ‘china’ (or ceramics) typical of 19th century hotel sites. It also produced a large number of intact and partially broken bottles – many formerly containing alcoholic beverages – including wine, beer and spirits. An assortment of animal bone – many with saw and knife marks – also provided information on some of the food and dinners that were being served at the hotel over 130 years ago. Other finds included leather boot fragments, large numbers of iron nails indicating some of the former timber buildings that existed on the site, and of course, several horse shoes!

One main surprise during the last days of the excavation was the discovery of a line of 4 barrel latrines or 19th century ‘long-drops’ which appeared to be contemporary and likely to have serviced the general customers of the hotel adjacent and probably even stable users. Although such latrines are fairly common individually in Queenstown and other NZ towns, the row of latrines is more unusual and a possible indicator to the popularity and perhaps status of the Eichardt’s Hotel in the later 19th century.

Now that the excavation stage is complete, some archaeological monitoring will take place during the foundation excavation to ensure that nothing has been missed in archaeological terms. The Skyline development, a three-storey mixed retail, commercial and apartment building, will overlook Lake Wakatipu and occupy the Marine Parade site, the first building since the 19th century structures were demolished in the early 1960s.